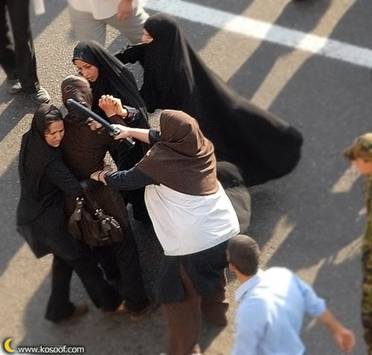 This was not about the green revolution or the government crackdown. The womenâ€™s rights group March 8 Womenâ€™s Organization of Iran and Afghanistan demonstration on Sunday had a simpler goal than the reformist opposition, if not more unattainable: equal rights for women in .

In the lead up to international womenâ€™s day, up to 100 protestors joined the march from the Iranian embassy in to . The demonstrators â€“ many of them Iranians living abroad â€“ carried pictures of Neda Agha Soltan, a young student protestor gunned down by the Iranian police during the election protests in June. Neda has become a symbol of â€™s opposition party. But to many women living under the Islamic Republic, she has come to mean much more.

â€œIn the last nine months women have come to the forefront of the struggle in Iran, especially young girls like Neda, because this sector is most affected by the governmentâ€™s policies and sharia law,â€‌ says the coordinator of the demonstration and March 8 Womenâ€™s Organisation activist Laila Parnian. â€œWomen in have fought for their rights for 30 years, and today they are really angry â€“ they do not want this regime.â€‌

One Iranian woman living in the , who wishes to remain anonymous, explains: â€œIâ€™m out here to support the Iranian movement because since the elections I think it is worse for women in , and people need to know that Iranian women need help.â€‌

The womenâ€™s movement has been buried in a sea of green since the election aftermath thrust the opposition into the international media spotlight. But the majority of the protestors gathered in central were not supporters of opposition candidate Mir-Hossein Mousavi.

â€œThis so-called green revolution is part of the Iranian regime,â€‌ says Gissoo Shakeri, an Iranian activist living in . â€œThe opposition party does not even mention womenâ€™s rights. We are fighting for a secular society, which the opposition does not support.â€‌

According to Parnian, Mousavi is part of the problem. â€œHundreds of political prisoners were executed when Mousavi was prime minister in the 1980s. He is part of this government and he is not one of us,â€‌ she says.

The protestors want much more than Mousavi is offering. They want an end to forced marriages of girls as young as 13, the abolishment of laws that allow stoning and require Iranian women to wear headscarves, and they demand a secular society.

â€œWomen should have the option to make their own choices about what to wear, what to do, and what to say,â€‌ says Shakeri, who also says that Iranian women should be given the option to have an abortion.

But while the green revolution may not represent the womenâ€™s movement in its entirety, there is no doubt that it has helped their cause in some respects.

As an article on MSNBC states:

â€œFor years, womenâ€™s defiance in came in carefully planned flashes of hair under their head scarves, brightly painted fingernails and trendy clothing that could be glimpsed under bulky coats and cloaks. But these small acts of rebellion against the theocratic government have been quickly eclipsed in the wake of the disputed June 12 presidential elections.â€‌

In the aftermath of the elections, Iranian women have marched (and fought) alongside their male counterparts during the protests, and as MSNBC points out, few will forget â€œthe sobering footage of a young woman named Neda, blood pouring from her mouth and nose, minutes after her fatal shooting.â€‌

The green movement has become a loudspeaker for all marginalized groups in to express their political discontent. But as the protestors in have demonstrated, itâ€™s worth remembering that there is more than one voice booming out from behind the megaphone.

â€œThe media want to show that there is one voice â€“ the Mousavi supporters,â€‌ says Parnian. â€œWe want to raise the Iranian voice in the west, and show the western world that there is another voice in : the women of are shouting no to the Islamic regime.â€‌