women were at the forefront of the fight against the Islamic regime, 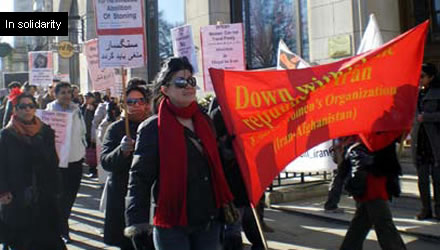 On International Womenâ€™s Day, around 100 people gathered outside the Iranian embassy in to protest against the repression of women in . Organised by the March 8 Womenâ€™s Organisation (Iran-Afghanistan), they heard a range of female speakers, who demanded an end to the Islamic regime.

No wonder that there was not a green scarf in sight. â€œMoussavi and his supporters are part of the Islamic regime. But we are with those women in who want more than just a few reforms. We want the overthrow of the entire regime,â€‌ said Yassamine Mather, chair of Hands Off the People of Iran, which supported the event.

International Womenâ€™s Day, which was established on the initiative of Clara Zetkin and the Second International in 1910, has always focused not just on the suffering of women - but their fightback, too. And who can deny that women in have to struggle against more enemies than most of us? Not only do they face the general patriarchal prejudices that all women do. They have also been at the forefront of the fight against the Islamic regime. After all, one of the first actions of the theocracy after the 1979 revolution was to force all women to wear the hijab.

But women also bear the main brunt of imperialist intervention in the country - be it in the form of sanctions or the threat of direct military intervention. â€œOne just has to look at and to see how the rights of women have been rolled back since the occupation,â€‌ said Leila Parnia, the main organiser of the event.

Go to www.hopoi.org to see highlights of the event.